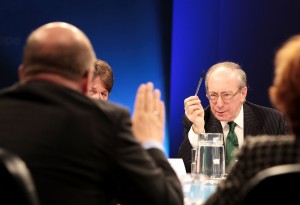 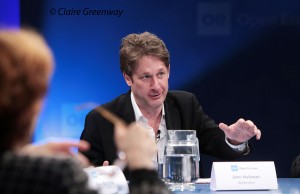 Top level British and European politicians sat round the table in front of a public audience to discuss the possible outcomes and consequences, with Sir Malcolm Rifkind representing the UK (pro membership) during the morning ‘Reform’ session and Lord Lamont for the UK (pro Brexit) in a ‘Brexit’ scenario in the afternoon, generating analogies from the guest speakers to divorces and pop band splits … 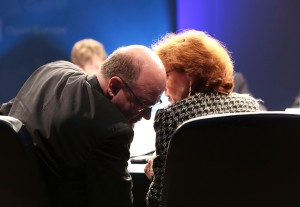 Germany and France have a private word

To rather glibly sum up a very well executed, much needed discussion event, it seems that a) most of Europe loves us (especially Sweden and the Netherlands, they really do), b) they don’t want us to leave but c) if we do, we must be prepared for post-divorce slamming doors, division of the CD collection and tit-for-tats.

Germany and France face UK and Ireland during the ‘Reform’ session

One particular point for staying in the EU, one that I naively hadn’t considered, was made in an impassioned speech by John Bruton, former Taoiseach of Ireland – on leaving Europe we (UK) leave Ireland completely in what Mr Bruton described as “an unfriendly act” and “devastating”.  Northern Ireland would no longer be a fellow EU member alongside the Republic of Ireland so what would be the practical implications for border logistics, structural stability on the island and relations in general, when it’s only in quite recent history that we were at odds?  Peace, harmony and a responsibility to stick by our very close neighbours (I would say family) shouldn’t be taken for granted or lightly dismissed.

But then maybe I’m just easily swayed by emotive, Irish speeches and am a child of the 70’s. As Former Deputy Finance Minister of Germany, Steffen Kampeter, said ‘We would respect you exercising your democratic right on voting for a Brexit’ but in the same breath he wouldn’t be at all happy with our decision and would certainly not allow us to “cherry pick” from the CD collection…(who still owns a CD collection these days anyway?)

And as for issues surrounding migration and the implications of a referendum this year …there’s more on that here, from The Guardian (with image usage).