An amazing network of volunteer groups has developed in the High Wycombe area, co-ordinating aid donation collection and distribution to refugees and asylum seekers in France, Greece, Syria and the UK.  The roots of these groups were planted when local people thought ‘There must be something I can do’ and then actually did it. 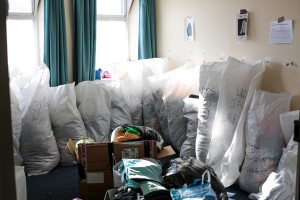 Donations sorted ready for distribution to refugees in Greece, Syria, France and the UK

The communication network and scale of groups such as ‘High Wycombe Donations for Refugees‘ has mushroomed in the last 6 months through Facebook, chatting to neighbours and work colleagues and discussions at the school gates, growing from providing the first van load to Calais to several container loads to Syria and Greece just a few weeks later. 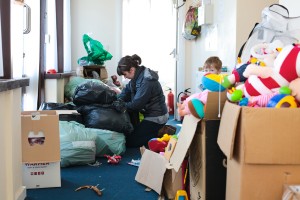 Volunteer worker Ann, with her little boy, collects together an aid package to take to asylum seekers in basic ‘emergency accommodation’ near Heathrow

Documented here is some of the work and people the local volunteer group are involved with, which recently extended to giving practical help to a group of asylum seekers who had reached the UK but who had essentially been forgotten about, with language barriers and lack of access to information meaning they were left, some for many weeks, in basic ‘emergency accommodation’ intended for a maximum of 4 nights. 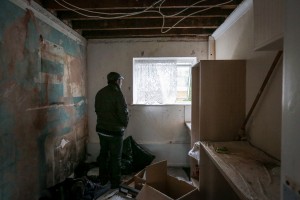 OK, so they have mercifully escaped from the awful conditions we’re witnessing on the continent and they have ‘a roof over their heads’, but they are left in limbo, not able to leave the housing or find out what might happen to them here in the UK, after traumatic experiences and difficult journeys.  The group, who are fearful of the repercussions if identified, includes a mother and 12 month old baby and people from countries including Iran, Albania, Iraq and African countries, escaping war, persecution, serious human rights abuses and threats of torture and death.

Extracts from an immigration interview

An Iranian refugee, seeking asylum in the UK after fleeing religious persecution, holds a photograph of the baby daughter he’s never met. The bandage on the father’s arm is a dressing following injuries sustained from self-harm and possibly attempted suicide earlier that week.

The volunteer group realised on a food and clothing run that these people had little or no access to information from the outside world, believed they weren’t allowed to leave the rooms or open curtains (a myth perpetrated by the accommodation management to ‘hide’ them),  had no means of cooking or storing fresh food, so endured inadequate diet supplied by ‘hotel’ management, poor hygiene and security and sporadic heating and hot water.

Studying Home Office documents whilst obeying instruction by ‘hotel management’ to keep curtains drawn shut at all times, and surrounded by food and eating utensils donated by the volunteer groups.

The volunteers introduced them to local volunteer translators and professionals with knowledge of the forms and procedures they needed to follow to complete their journey to safety.  Fortunately, since the involvement of the group and exposure it generated, there was a flurry of activity from the Home Office and accommodation management with a miraculous (moderate) improvement in food and heating and their cause was picked up by Tony Greaves, member of the House of Lords.

They also now leave their curtains open during the day.

Word gets to Lord Tony Greaves of the situation the asylum seekers have been left in. He meets the group and asks questions in the House of Lords the next day.